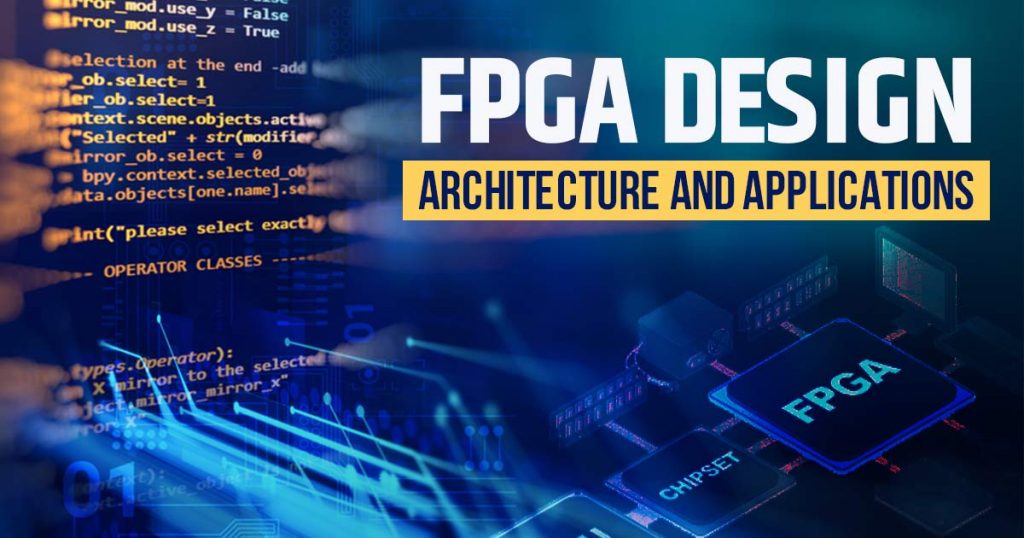 FPGA Design: An FPGA is a programmable logic device with a matrix of reconfigurable gate array logic circuits. When an FPGA is configured, the internal circuitry is coupled in such a way that the software program is implemented in hardware. Unlike processors, FPGAs process logic on dedicated hardware and do not have an operating system.

Different processing operations do not have to fight for the same resources because FPGAs are really parallel in nature. As a result, when extra processing is introduced, the performance of one section of the application is unaffected. Intel, Xilinx, Lattice Semiconductor, and Microchip Technology are among the major FPGA manufacturers.

Additionally, numerous control loops can execute at different rates on a single FPGA device. Critical interlock logic can be enforced by FPGA-based control systems, and they can be built to avoid I/O forcing by an operator.

Unlike hard-wired printed circuit board (PCB) designs with set hardware resources, FPGA-based systems can actually rearrange their internal circuitry to allow reconfiguration once the control system has been deployed to the field. Dedicated hardware circuitry’s performance and dependability are delivered by FPGA devices.

Block RAMs, DSP Slices, PCI Express compatibility, and programmable fabric are all part of FPGAs’ heterogeneous computation platforms. Because all of these compute resources can be accessed at the same time, they enable parallelism and pipelining of applications throughout the platform. An FPGA’s basic structure consists of logic units, programmable interconnects, and memory. The placement of these blocks is unique to each manufacturer. 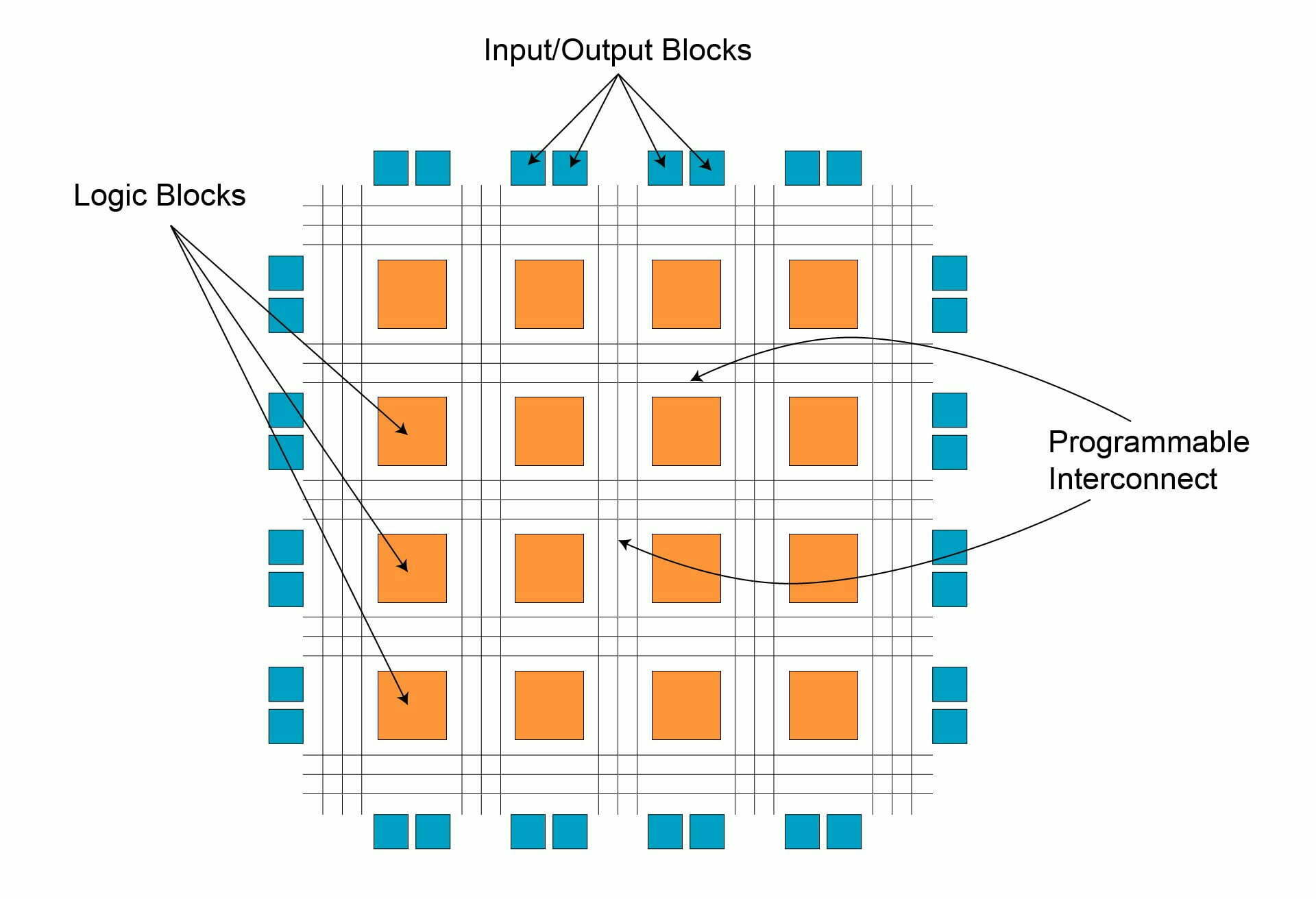 FPGAs can be classified into three groups based on their internal block arrangement:

The logic elements (called CLBs) are placed in rows and columns of a matrix, with connections built out between them. I/O blocks surround this symmetrical matrix, connecting it to the outside world. A pair of programmable flip-flops and an n-input Lookup table make up each CLB.

Functions such as tristate control and output transition speed are likewise controlled by I/O blocks. Interconnects are used to create a routing path. When compared to general-purpose interconnect, direct interconnects between neighbouring logic elements have a shorter delay.

Alternating rows of logic modules and customizable connection tracks make up a row-based design. The input-output blocks are located on the row’s periphery. Vertical interconnects can connect one row to neighbouring rows.

This architecture is organized hierarchically, with just logic blocks and interconnects at the top level. There are a number of logic modules in each logic block. Each logic module includes both combinatorial and sequential functional features.

The programmed memory controls each of these functioning parts. Programmable interconnect arrays are used to communicate between logic blocks. This system of logic blocks and interconnects is surrounded by input-output utilized blocks.

Internal Structure of an FPGA

Each FPGA includes three important features that can be found at the heart of modern-day FPGA architecture:

An FPGA’s logic blocks can be designed to provide functionality as simple as that of a transistor or as complicated as that of a microprocessor. It may be used to implement a variety of sequential and combinational logic functions.

Modern FPGAs are made up of a variety of distinct blocks, such as dedicated memory blocks and multiplexers. To control the precise function of each piece, configuration memory is used across the logic blocks. Any of the following can be used to implement logic blocks in an FPGA: 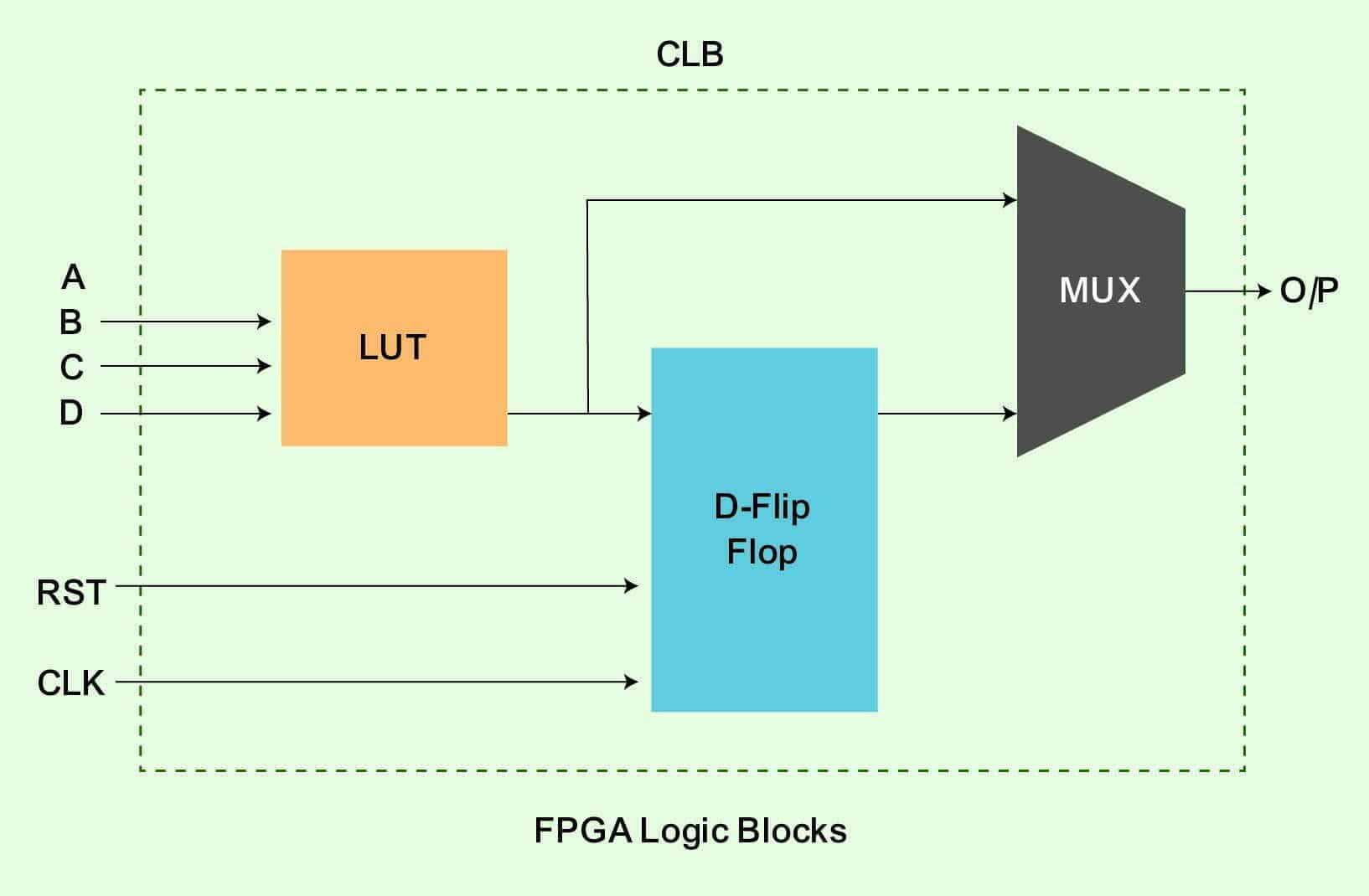 In FPGAs, routing is made up of wire segments of variable lengths that are joined by electrically programmable switches. The length and number of wire segments utilised for routing determine the density of logic blocks used in an FPGA.

The number of connecting segments utilized is often a compromise between the density of logic blocks employed and the amount of space taken up by routing. To complete a user-defined design unit, programmable routing connects logic blocks and input/output blocks. Multiplexers, pass transistors, and tri-state buffers make up this circuit. In a logic cluster, pass transistors and multiplexers are utilized to connect the logic units.

An input/output (I/O) block is a type of input/output device that can be used for both input and output. Edge-triggered D flip flops are used in both the input and output channels. The goal of the I/O blocks is to give a user interface from the outside world to the internal architecture of the FPGA. These cells take up a lot of space on the FPGA.

The design of I/O programmable blocks is very difficult due to the large variances in supply and reference voltages. In I/O architecture design, the standard selection is critical. Supporting a high number of standards might increase the size required for I/O cells on a silicon device.

All benefit from the ability to configure the FPGA’s CLBs into hundreds or thousands of similar processing blocks. Random logics, SPLDs, device controllers, communication encoding, and filtering are just a few of the applications that they can be used for. 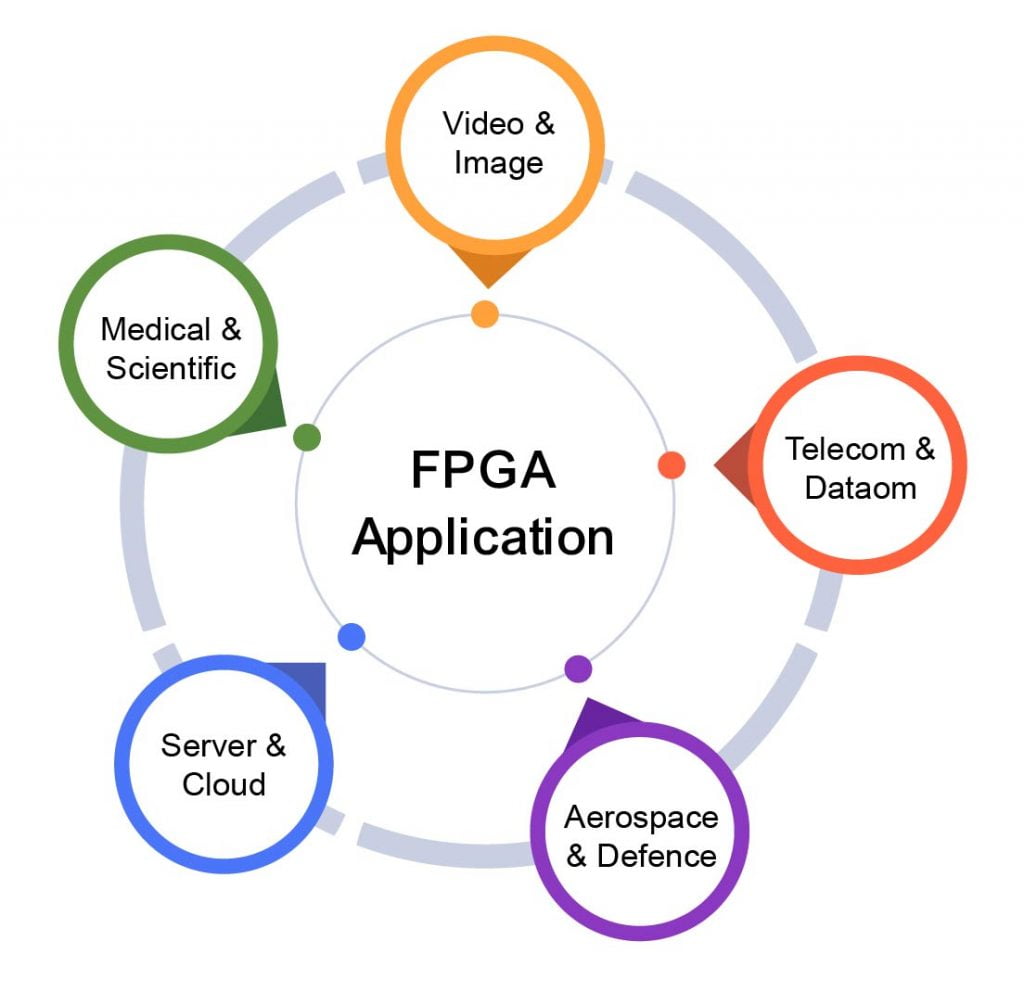 In practice, FPGA Design are widely employed in the development of deep neural networks, or DNNs, which will eventually lead to the creation and maintenance of artificially intelligent systems.

When compared to GPUs, high-performance FPGA Design may provide even more assistance to an application, and are consequently chosen for the development of machine learning technologies.

FPGA Design are employed in the fields of encrypting/decrypting and Post-quantum cryptography because of their massive computing parallelism, ability to adjust the computational units to the bit-width needed, and low latency. Radio astronomy is the science that is in charge of capturing electromagnetic radiation from space to analyze the processes that occur there.

The recognition of the speaker is a technology used in security, information retrieval systems, and other areas, and its breadth of application is projected to expand in the future. When comparing a person’s voice to previously stored patterns, the FPGA Design is particularly efficient in these situations.

FPGA Design are also used in a variety of aviation and defense applications due to their advantageous properties.

These medical vision systems are progressively requiring higher resolution and processing capacity, and many of them must be designed in real-time, thus the advantages of frequency FPGA Design and parallel processing are well suited to these requirements.

Compression, data filtering, and algorithmic acceleration are also provided by FPGA Design. This is combined with the fact that if your problem does not fit inside of a single FPGA Design, you may scale it out across numerous FPGA Design without incurring the same penalty as scaling out over CPUs or GPUs.